The Sarnia chapter of the Awesome Foundation was started in 2013. The idea was simple: the trustees come together once a month to hand out a $1000 grant to someone with an awesome idea.

The first Awesome Foundation chapter was founded in Boston in 2009. John DeGroot learned about the movement the following year at a Canadian Association of Family Enterprise meeting in London and brought the idea to Sarnia. “They brought in a guest speaker one month who was instrumental in starting the Toronto Awesome Foundation Chapter. About a year after this meeting I approached a few people. The people that I approached weren’t that interested at the time. I let it sit for a few more months and then one day I sent out three or four more emails. I told them to check out the Awesome Foundation website, www.awesomefoundation.org.” Unlike the first time, several people expressed interest immediately. Alison Mahon was especially keen to help start the group. “Alison was instrumental. She is well connected and knows a lot of people. Within a month we had our twelve trustees. Together we championed this idea and got it off the ground.” 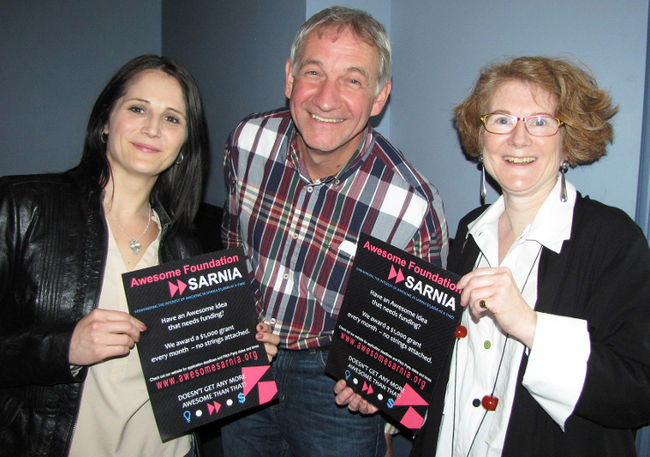 The process for applying for the funds couldn’t be easier, DeGroot explains. “Applicants fill out an online form. It is very simple: you include your name and what will they use the money for. Then the applications are reviewed. At the monthly pitch party, three applicants are invited to pitch their ideas, and the trustees vote on which applicant will receive the funds. The winner takes the money home that night.” He also emphasizes that while they are willing to fund just about anything, they place a strong emphasis on projects that build community. They are also looking for projects that aren’t eligible for traditional funding.

The first pitch party took place on June 6, 2013. Vicki Garland applied for funding for a Parking Lot Dance Party to help celebrate five years of the Parents Standing Together Tenants Association in her neighbourhood. The money was used to purchase food and games and prizes for the dance and hula hoop contests. Since then, the Awesome Foundation has funded dozens of local projects. A particularly popular event was the Souper Day, put on by the One Tomato Project in the summer of 2013. The group served tomato soup made with ingredients grown in One Tomato communal gardens. Other events that have received funds include: Diner en Blanc, Joy-full Socks, Ignite Sarnia, Music for the Soul, Global Citizenship Summit, Lambton College Aboriginal Students’ Council, Sarnia Christian School Outdoor Community Ice Rink, Sarnia Goldenhawk Restoration, Southwest International Film Festival, and the Lansdowne School Tree Stump Carving.

“The hardest part is turning down the other two pitches each month. The applicants know this is coming, but it’s still hard. A lot of them with learn from the process and will apply again.” The funds are routed through the Sarnia Community Foundation and they write the cheque for the winning pitch.