The Sexual Assault Survivors’ Centre Sarnia-Lambton (SASCSL) was started in 1982 by a group of individuals concerned about the lack of comprehensive services for sexual assault victims. They began a grassroots initiative to support and assist survivors of sexual violence and rape. Michelle Batty, SASCSL’s Executive Director, has been with the organization for over twenty-five years. “We started with a 24-hour crisis line staffed entirely by volunteers. Thirty-five years later, the 24-hour crisis line continues to be a core service, alongside individual and group counselling, advocacy, accompaniment and public education.”

Initially SASCSL was funded by bake sales, 50/50 draws and donations, including their chocolate bar sales. In 1990, the Ministry of the Solicitor General began to provide annual funding to cover operating expenses and more enhanced services. Today, SASCSL receives about 80% of its funding from the Ministry of the Attorney General and 20% from fundraising and donations. “What we receive from the government is not sufficient to do the work that needs to be done. Without our generous donors, there are services and programs that we could not provide. For example, we started with two counsellors seeing an average of 25 clients a month. Today, we have two public educators, a human trafficking coordinator and three counsellors providing services to over 100 clients a month.” 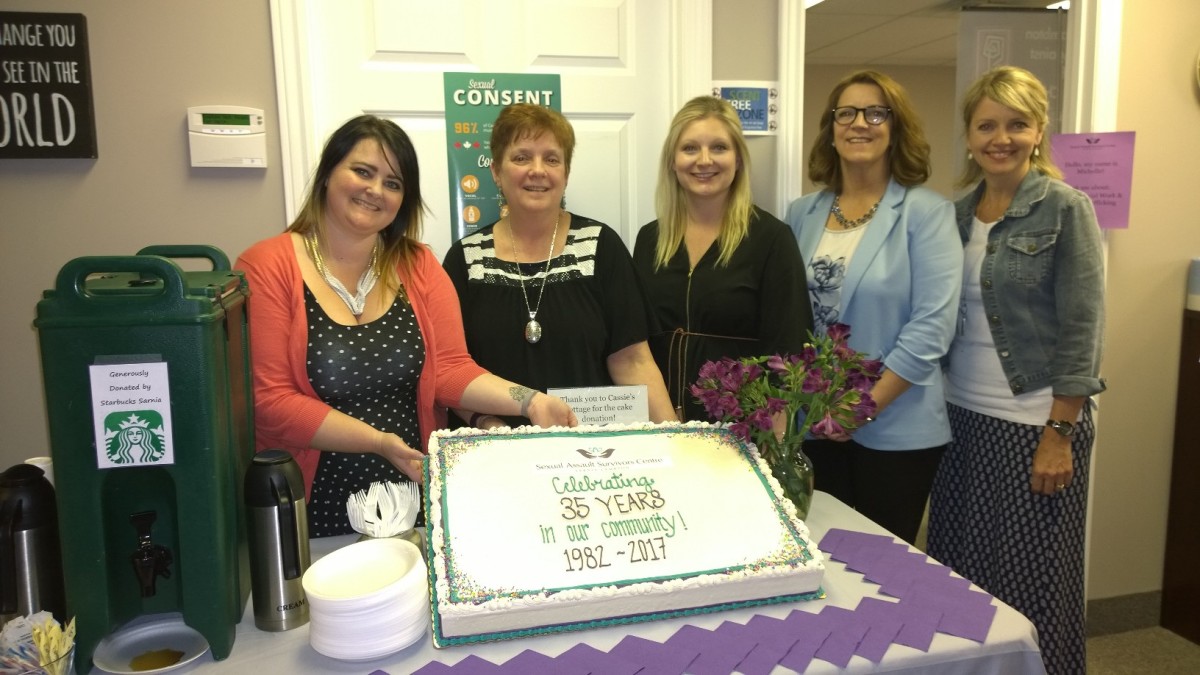 SASCSL was one of the first sexual assault centres in Ontario and has been a leader in identifying gaps in service for victims of sexual assault. “Early on, we identified the need for services for male survivors of sexual violence and for victims of human trafficking. At the time, we did this with no funding. Now the government provides specific funding for these programs to sexual assault centres throughout the province.” SASCSL has been honoured to be named to the Mayor's honour list in 2006 and to receive the Attorney General's Victim Services Award of Distinction in 2011.

SASCSL is involved in many community initiatives to bring awareness and education on the topic of sexual violence, while also offering opportunities for healing for all survivors. “This is our 11th year hosting the International Women’s Day celebration which honours local women, our 25th year organizing Take Back the Night in September, and May is Sexual Violence Awareness Month with many events planned.” The Footsteps—Tribute to Courage project brought 63 survivors together to place flagstones with artwork, a message and their footprints on a path in Centennial Park. “We have had survivors of all ages come to the centre after walking the path. One senior had been sexually abused as a child and had never talked to anyone about it, but now wanted to work through things. That is healing and empowerment.”

Batty believes that preventing violence against women and children goes beyond public education and awareness campaigns. “We need a cultural shift in beliefs. No one deserves to be abused, no one asks for it, victims are not to blame and perpetrators need to be held accountable for their actions. All of us need to be part of the solutions.”