Playing for Charity’s first annual 24 Hour Video Game Marathon was Darryl Heater’s way of combining two things that he loves: video games and his community. Heater suggested the idea to Max Major, and together they created the event. “We aren’t runners or athletic. We wanted to take one of our hobbies and try and raise some funds with it. Gaming and especially online gaming has become a big thing. There is an audience for it and we wanted to tap into that,” explains Major. They invited friends Dave Evans and Eric Soepboer to take part as well. “We picked the other couple of guys based on who we felt we could be locked in a mall with overnight. We wanted entertaining people since the event was being streamed online,” Major explains.

They wanted to raise money for a local organization and they approached Noelle’s Gift right away. “We thought of the connection everyone makes between kids and video games, and we knew that we wanted to give the money raised to a charity focused on kids,” Evans adds. They discussed their idea with the Lambton Mall management and decided to hold the event on Black Friday. “The Mall had been building up the Black Friday sales and they thought this might be a good time to hold our event. We hope it’s a Black Friday tradition moving forward.” Support from other businesses quickly followed. “Tepperman’s supplied our ‘living room.’ They set up a sectional sofa and an amazing 65” TV. Boston Pizza sent us pizzas to eat. Mucho Burrito gave us a bunch of prizes to hand out. The community really got behind what we were doing,” Major explains. 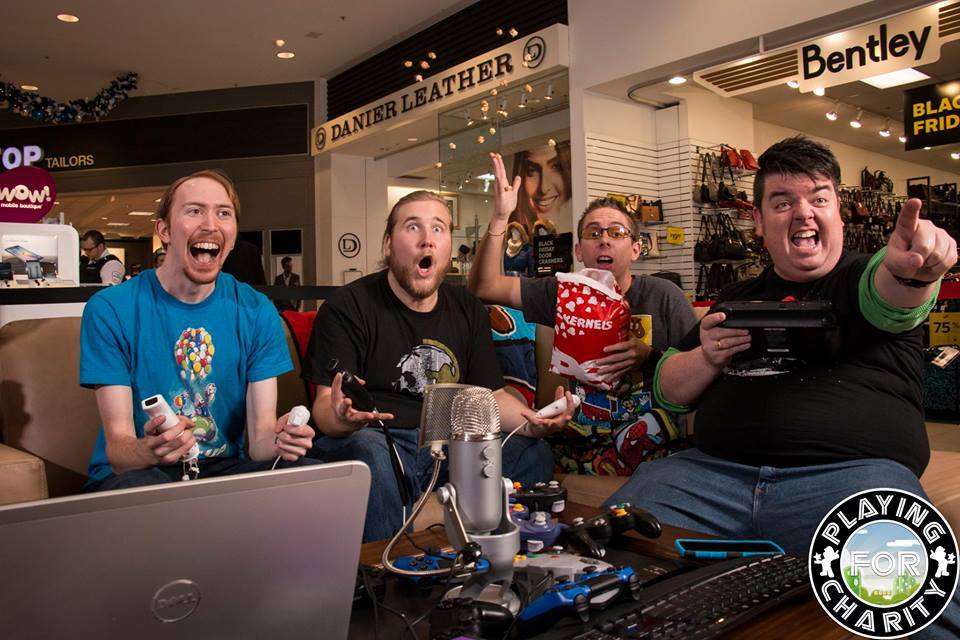 On Friday November 27, 2015 the four friends met at Lambton Mall to play a video game marathon. They streamed the entire event online and people from around the world tuned in. “Around midnight a very popular Twitch.tv stream ended and all of the viewers joined our live feed. All of a sudden we were talking to people from Australia, Germany, Mexico, England and of course the US. They were people from all over the world and some of them even donated,” Major explains. That helped them through the difficult late-night hours. “Staying up for 24 hours playing games was a lot harder than it seems. At 4 am you have to get through that wall,” Evans adds. “It was very gratifying and we got to see a bunch of people we hadn’t seen in a while. They came to the mall to check it out.”

The four are very happy with the community’s response. The event raised $2702.09. Noelle’s Gift spread the word ahead of time and many students stopped by to show their support. “The reaction that people had towards the event was really amazing, surprising actually,” says Evans. They are looking at ways to expand the event so that more people can participate next year. “It just takes a lot to pull it off. You need all of the TVs, consoles, outlets and space but it is something we want to do.”