Justin Hayes already had plenty of customer service experience when he opened his own business. His father owned a Shopper’s Drug Mart and Sam the Record Man. “I worked at both Shopper’s and Sam’s, so I learned how to treat customers,” he explains. Interested in starting something of his own, Hayes and his father looked at a number of business opportunities. “Kernels Popcorn was located right across from Sam the Record Man in Lambton Mall, and one day we got to chatting with the owners and learned that the business was for sale.” In August 1995, Hayes bought Kernels with the financial backing of his father.

Kernels had always been a kiosk in Lambton Mall, but when the lease on their space came up, Hayes ensured they secured the best location. “I walked around with the leasing agent, and he offered me a few different spots. Location is everything. I wanted to be seen from both of the mall’s hallways, which is why I chose our current location.” The Kernels motto is Nose, Heart, Tummy. The nose is the aroma, the heart is touching the customers’ heart with energetic, warm friendly service, and tummy is the delicious sample. “The aroma of the popcorn and the free samples have really made Kernels what it is today. As for the customer service, there aren’t too many times you can sneak by Kernels without me saying, ‘Hello!’” 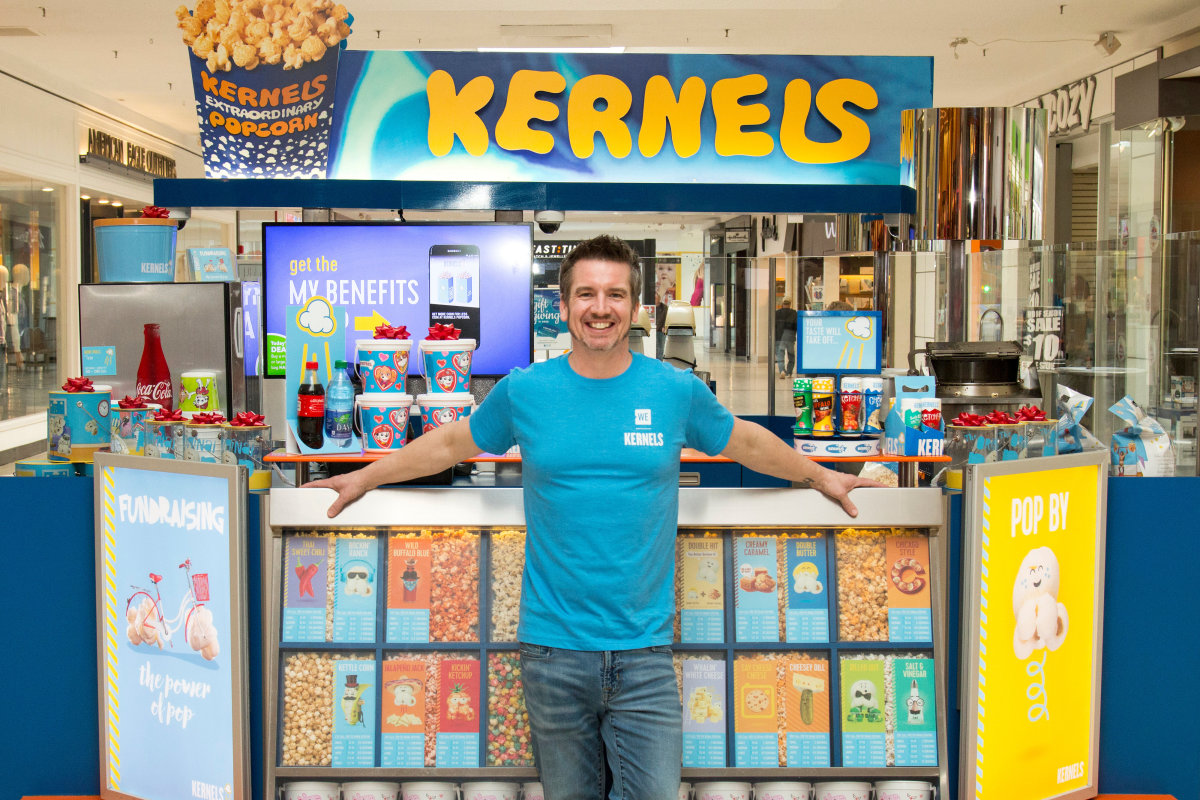 In 2010, Kernels launched its fundraising program providing schools, sports teams, and charities an opportunity to sell a fun product to raise funds. In 2011, the Ontario government changed student nutrition policies, so Kernels went back to the drawing board and created all new fundraising recipes. “Everything sold in schools is nut-free, gluten-free, and compliant with the Ontario school board.” Some months, Hayes and his team have popped and bagged over 10,000 bags of popcorn for different fundraisers.

Kernels sells 15 flavors of popcorn; the most popular is Cheesey Dill. “It’s tricky to switch out the flavors because people always want their favourite. We do carry all the seasonings, so if you don’t see the flavor you want, we will gladly make it for you.” His golden rule is to treat his customers the same way he would like to be treated. “Greeting the customers, having a brief conversation, and thanking them for their business is really important. Popcorn is a fun product, and it’s easy to make people smile.”

Hayes also believes in reinvesting in the community. “We’ve supported a number of charities over the years including St. Joseph’s Hospice, the Kidney Foundation, Goodwill, and the Inn of the Good Shepherd.” Hayes will be celebrating his 25th anniversary with Kernels this year. “Some years have been easier than others, but it has always been fun. Everyone has to work to earn a living and people should enjoy what they do. I do, and that has made all the difference.”